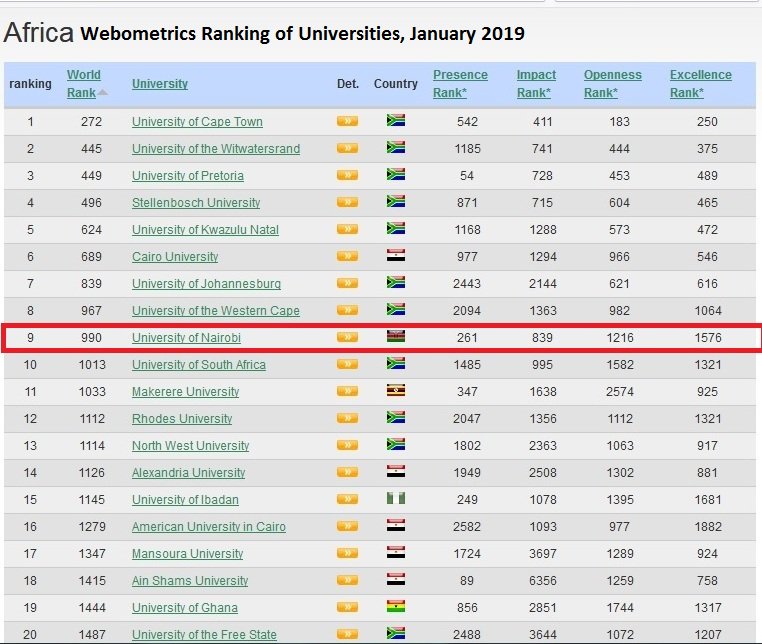 The University of Nairobi has taken the first position in East Africa in the latest Webometrics ranking of world universities.  http://www.webometrics.info/en/world

UoN vice chancellor Peter Mbithi said the university is embarking on major reforms to improve quality of teaching that will see its rankings improve in future.

“We are keen at ensuring that we focus on research and training of our lecturers in different fields to ensure they transfer the best skills to students,” he said.

The Webometrics ranking focused on 11,995 universities across the world.

“The School of Dental Sciences has over the years grown and its a great feeling to be back.”

“We need to regularly interact with students at the School, share our experiences with them, give talks and be guests at their functions, provide internship opportunities and generally serve as role models”

“The Law classes are now very interactive, allowing for a vibrant training environment that enables students to realize intellectual  and social development.”

“Since Graduating from the University of Nairobi in 1997 I have mentored young people, drawing from my own experience of failing in more than 15 business ventures but never giving up. This is what the university made us”

Do NOT follow this link or you will be banned from the site!